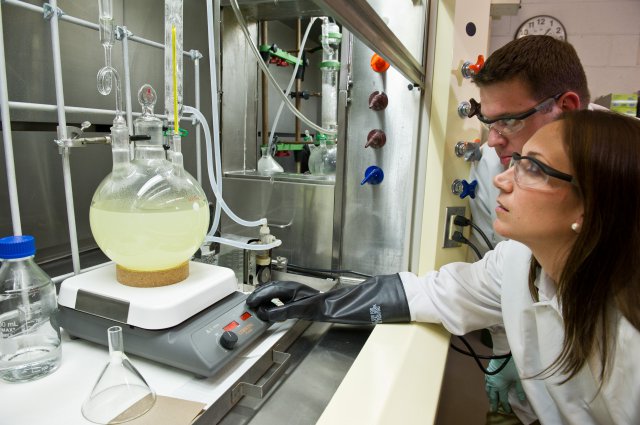 Challenges of scaling up production from grams to kilos

Process chemist will get a process or a readymade from either the company or from the
literature. Usually it has been done at a relatively small scale and it has very often been
done by a medicinal chemist who has been making the compound for their research efforts.
They are not worried about the chemistry that’s used, all they are interested in is getting the
molecule and testing it to see if it has the right biological effect. They generally use
expensive reagents or selecting a route that was quite complicated as long as it gave them
the product in the end.
So very often it’s not possible to scale up a medicinal chemist’s process, because it might be
unsafe to do so. A lot of medicinal chemists will do what’s called “one pot” reactions, where
you add all of your input reagents in a pot and then you heat it up. If you get an exotherm
heat generated in that reaction, it’s such a small scale they can usually manage it. But one
can’t do that on a large scale – if you put all your molecules together and generate a large
amount of heat it can be very dangerous. So, you have to look at the chemistry that’s been
done and see the route of synthesis if that can be scaled up safely.
It’s usually thinking about making things safe, robust and repeatable. One of the things we
tend to do is not use the latest reagents. Very often, something more traditional is the
better approach than the latest trendy reagent, which has perhaps caught the medicinal
chemist’s eye. So we’ll tend to try and make things as efficient as possible. Quite often a
medicinal chemist will use things on a stoichiometric basis, so they’ll use one reagent for
one molecule on a one-to-one basis. When you scale it up, you try where possible to use a
catalytic amount of one material, so you tend to use catalysis more than you do in medicinal
chemistry.

Taking the reactions that work perfectly at the laboratory level and scaling them up to the
manufacturing level is not a simple, linear process. “Nothing ever scales linearly. You never
get to take a product at 5 g and then do it at 50 g and have it work the same way, and all the
more so when you are moving from 50 g to 5 kg,"
"New problems always arise that you cannot anticipate. No process chemist ever gets an
easier process when they take it up in scale; there are always things to be overcome."
Even more significant in the scale-up equation is the fact that most of the new drug
molecules coming out of discovery these days are chiral. "Developing asymmetric
technology that will work at scale is one of our biggest challenges today." A lot of the
asymmetric technology developed in pharma, as well as in academic labs, is quite difficult
from a scale-up perspective, because the performance is affected by scale-up itself.
Another big scale-up challenge involves polymorphism. Scientists must produce a consistent
particle size for the formulated product; if it 's irregular or different, that can change the
drug manufacturing process.

If the API- active pharmaceutical ingredient in the compound is not consistent in its particle
size distribution, it can become a significant problem. "You want to develop a crystallization
process that gives you the same particle distribution and polymorphs at scale.
To some extent, these are challenges that have remained the same for as long as there has
been bulk manufacture of pharmaceutical compounds.
The longer it takes a company to address its scale-up problems, the more expensive it
becomes and the longer it is before a drug is successfully brought to market."That's the big
challenge in scale-up today, which has also been the biggest challenge for the past 30 years
and probably will be 20 years from now as well," says big MNCs scientist."How do you scale
up production as quickly, cheaply, and safely as possible?